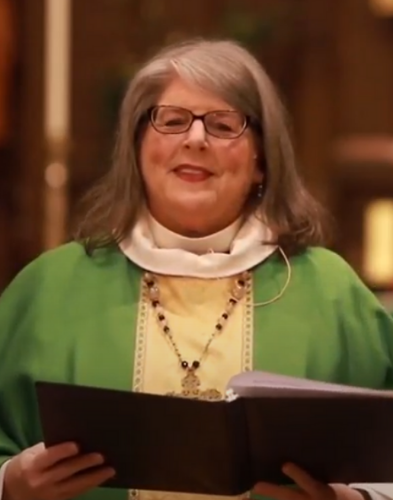 Mother Dawn Frankfurt was called to St. James in March 2011. Mother Dawn grew up in Oklahoma City and Edmond, Okla. She earned her bachelor’s degree in English at Oklahoma University and undertook a career in marketing after a few years of graduate study in creative writing. In a dozen years as a marketing professional,
she held positions in Oklahoma City; Wilmington, N.C.; and Honolulu, Hawaii.

The only thing important enough to take her away from the paradise of island life was her call to ordained ministry in the Episcopal Church. More than 10 years ago, she was sponsored by the Diocese of Hawaii and attended the Berkeley Divinity School at Yale for seminary training. There she served two parishes in Connecticut: Christ Church Tashua in Trumbull and The Church of the Holy Trinity in Middletown. Historic Trinity Church, in Staunton, Va., was her first church home and where she was ordained to the priesthood. She served Trinity as Associate Rector for three years and
stayed to serve as Interim Rector for another year before returning to Oklahoma to be close to family. 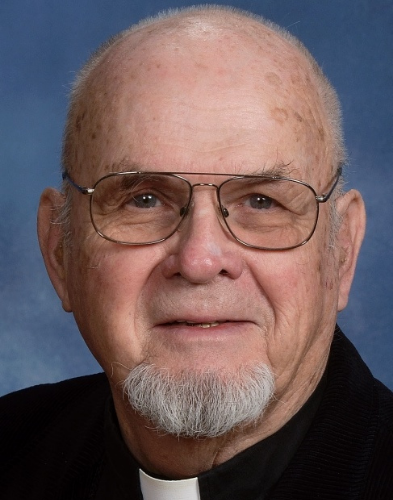 A retired priest with 50 years of service associated with St. James as volunteer priest-missioner,
Sam Criss makes hospital calls and is an occasional teacher and lecturer.

He is married to Beth Criss, and they have three children and five grandchildren.

He is an oil painter, violinist, and weaver. He and his wife, a retired social worker,
are having lots of fun traveling, and enjoying their youngest grandchildren. 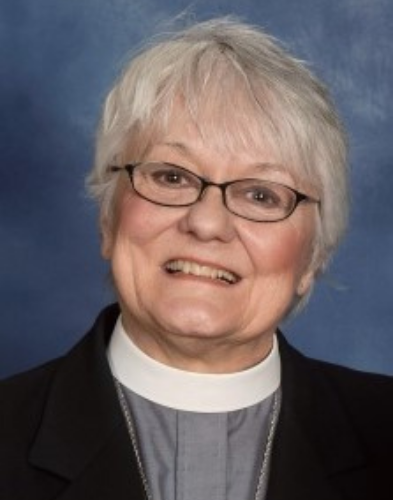 Deacon Deedee Evans was born in Washington State, reared in Oklahoma, moved to Wichita from Texas, and graduated from Friends University. She has two children and five grandchildren. For several years, she was director of the volunteer center at United Way of the Plains and is retired after nearly 15 years as a staff chaplain with Hynes Memorial Hospice. She has sung in community and church choirs, played flute in community bands, and has been a singer with the 60-member Wichita Broadway Singers. An ordained deacon for more than 20 years, Deedee focuses on pastoral care, and facilitates two grief support groups, one at St. James and one at a Larksfield, a large local retirement community. 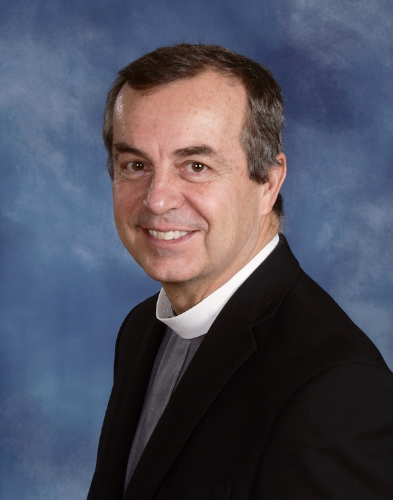 Deacon Jeff Roper graduated from The University of The South School of Theology (Education for Ministry) in May 2009; the Kansas School for Ministry in July 2010; and was ordained as an Episcopal Deacon on Jan. 8, 2011. Besides being a deacon at St James, Jeff has been involved as a campus minister for Episcopal Campus Ministry of Wichita, a lay Eucharistic visitor and Vacation Bible School teacher at St. James, and previously, a youth sponsor and chalice bearer at St. John’s.

Jeff graduated from the University of Kansas with a BA in English and political science and from Wichita State University with a BA in education and a master’s in English. He teaches junior and senior English (AP literature and composition) at Andover High School. In addition to teaching, over the years Jeff has coached football and girls and boys soccer. 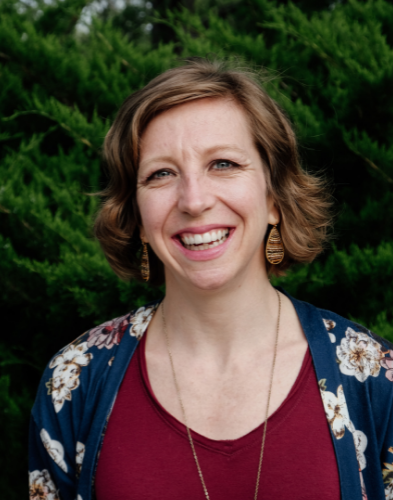 Chelsea Whipple joined St. James as the Christian formation director in September 2016 and then as the program director in 2019. She coordinates the children, youth and adult education ministries as well as oversees the various programs that are run in and out of the church. Chelsea has a master’s degree in New Testament studies from Bangor Theological Seminary and a bachelor’s degree in education from Wichita State University. She is working on a doctor of ministry at Fuller Theological Seminary. She has served as a missionary in Monterrey, Mexico, and the hurricane-ravaged areas of Mississippi and Louisiana. She serves as treasurer for Global Faith in Action. She is the co-host of The Contemplative Motherhood podcast.

Chelsea is married to Brandon Whipple and has three young boys.

In her spare time, she enjoys reading, running, and anything outdoors. 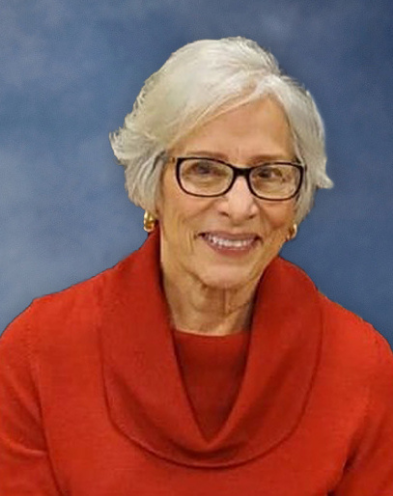 Susie was baptized at St. James. She grew up in Wichita and has two sons. She has served as our bookkeeper since July 2020. She also is co-chair of the 100th Anniversary Committee, chaired the Olde English Tea for two years
and has served St. James in other capacities.

She worked as a volunteer treasurer/bookkeeper at St. Stephen’s, a volunteer financial consultant/bookkeeper at Episcopal Migration Ministries and helped establish her sons’ businesses. She also was the custodian of records for the Sedgwick County District Attorney’s Office. She is a past president of the Junior League of Wichita and has served on many nonprofit boards.

Susie enjoys reading, handwork such as knitting and needlepoint, baking and cooking. 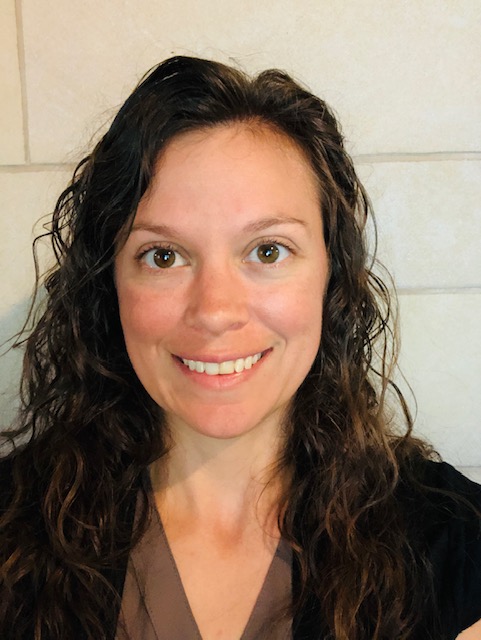 Krystal was born and raised in the Wichita area, but recently moved back from Alaska after living in Anchorage for 5 years. Krystal graduated from Wichita State University with a degree in Women’s Studies, and enjoys continually learning about the various ways that our identities intersect with our lived experiences in the world. She was the administrative assistant at her church in Anchorage, and really enjoyed working out the details necessary for congregations to feel connected and organized.

Krystal is married to the Rev. Jacob Poindexter, an UCC pastor. They have 2 teenage children. The family loves to spend time outside, whether hiking, fishing, or relaxing at the park with their dog. 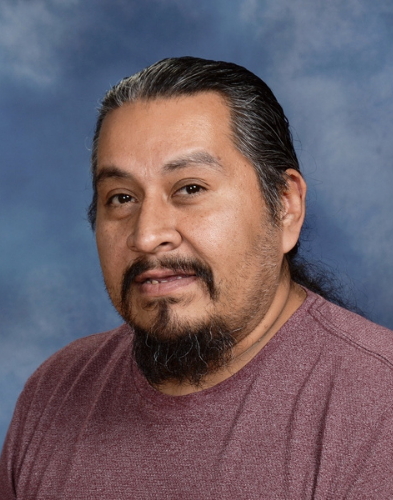 Jose was born and raised in Chicago and moved to Wichita in 2009. He then started working at Wichita State University.

In 2016, Jose took on a part-time position as our church sexton, which grew into a full-time job. Jose and his wife, Maribel; son, Jose; and daughter, Jackey; take excellent care of our church.

Jose and his family are responsible for all sexton duties at St. James including cleaning
and setting up for services and special events.

Jose says he and his family seek to provide a “clean and welcoming place for all guests, staff and parishioners”
and feel blessed to be a part of our parish.

(The year in parenthesis indicates the year of the annual meeting when the current term comes to an end.) 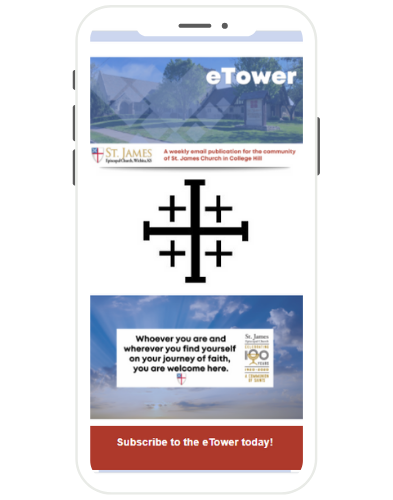