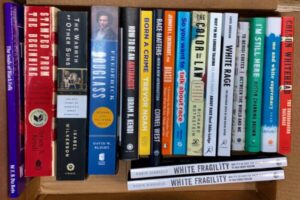 These books are available for loan to St. James parishioners.

*Available for loan from the St. James Library

These books are available for loan to St. James parishioners.

*Notes of a Native Son, by James Baldwin

*The Fire Next Time, by James Baldwin

*Between the World and Me, by Ta-Nehisi Coates

*The Narrative and Selected Writings, by Frederick Douglass

**Biased: Uncovering the Hidden Prejudice That Shapes What We See, Think, and Do, by Jennifer L. Eberhardt PhD

*Why I’m No Longer Talking to White People About Race, by Reni Eddo-Lodge

*Begin Again: James Baldwin’s America and Its Urgent Lessons for Our Own, by Eddie S. Glaude Jr.

*How to Be an Antiracist (Sunday Times best seller), by Ibram X. Kendi

*Stamped from the Beginning: The Definitive History of Racist Ideas in America (National Book Award Winner), by Ibram X. Kendi

My Grandmother’s Hands: Racialized Trauma and the Pathway to Mending Our Hearts and Bodies, by Resmaa Menakem   (on order)

*Song of Solomon, by Toni Morrison

*Born a Crime: Stories from a South African Childhood, by Trevor Noah

*So You Want to Talk About Race, by Ijeoma Oluo

*The Color of Law: A Forgotten History of How Our Government Segregated America, by Richard Rothstein

*Me and White Supremacy: Combat Racism, Change the World, and Become a Good Ancestor, by Layla Saad

*The Warmth of Other Suns: The Epic Story of America’s Great Migration, by Isabel Wilkerson